The tiles are loaded one row at a time from a read buffer. Commands F0-FE skip 2-16 tiles, leaving the previous row's tiles in the read buffer. In other words, they copy the tiles that are one space down. Command FF is followed by two bytes: a number, and a normal map tile. The map tile is written that many times, plus two. For example, the command "FF 03 40" would write "40 40 40 40 40" to the map. To put it simply: commands F0-FE are for vertical repetition, and command FF is for horizontal repetition. 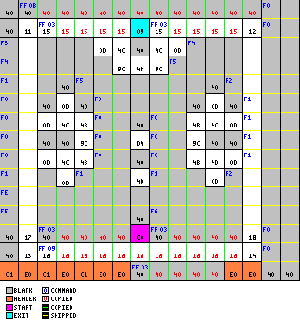 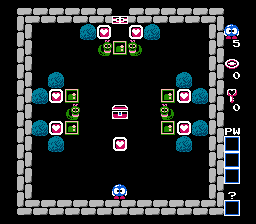 First room as it appears in the game